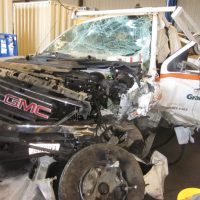 It was mid-January in the Monterey Bay Area. Though late, around 11:30 pm, the weather was pleasant, clear and dry, for winter in northern California.

Earlier that evening, Eugenio Vega, a young (31-year-old) pastor of a small community church, drove with his wife, Erica, and two young men from his congregation to a neighboring city to socialize with members of another church. After the meeting, the four got into the pastor’s Toyota Rav4 and started the trip home, which should have taken about 40 minutes along the coastal road, California’s Highway 1. Eugenio drove with Erica in the passenger seat next to him and his two young congregants in the back seat.

Highway 1 is a two-lane highway with one lane northbound, the other southbound, divided by double-yellow lines. On this night, Eugenio and his passengers were in the northbound lane on the stretch of highway between Moss Landing and Watsonville.

In the on-coming lane was a heavy-duty pickup truck owned by a large construction company called Granite Rock. The truck was driven by a Granite Rock employee named Christian Thomsen, who was driving home from a construction site where he had worked for 12 hours earlier that day. Granite Rock allowed Thomsen to drive the truck, despite the fact that public records showed that Thomsen had multiple “points” on his driving record, including an arrest for driving under the influence of the drug Oxycodone, for which he was convicted of reckless driving in conscious disregard for the safety of others.

As the Granite Rock truck approached the Toyota, Thomsen drove the truck across the double yellow lines and smashed into the left front of the Toyota. The force of the crash caused extensive damage to the Granite Rock truck and also caused it to roll over several times. The Toyota was demolished, especially the left front – the driver’s compartment – where Eugenio was sitting.

Erica, who had fallen asleep as the car hummed along in the dark highway, was jarred awake by the terrible sound, and by excruciating pain, of what seemed like a bomb exploding in the car. As she began to realize what had happened, Erica was confronted by the horrible sight her husband, unconscious and grievously injured, barely clinging to life. She heard the groans of the two badly injured young men in the seat behind her. Erica was also in pain from multiple broken bones and internal injuries.

Eugenio died a few days after the crash. Erica was hospitalized for her own injuries, and she continues to suffer from those injuries to this day, not to mention the emotional trauma of forever losing the love and affection of her husband. The two young church members also suffered massive injuries, which included multiple badly-broken bones as well as lacerations and bruising to internal organs. Both young men required surgeries involving doctors implanting hardware to hold bones in place and to stop internal bleeding.

The Allen Law Firm’s personal injury lawyer, Scott Allen, filed suit for wrongful death on behalf of Erica as well as Eugenio’s pre-teen daughter. The firm also filed suit on behalf of the two young church members who were injured while riding in the back seat of the Toyota. Our firm also teamed up with attorneys Stephen Cox and Christopher McElwain to take on the defendants, who were represented by two giant law firms, each with hundreds of lawyers.

The defendants in the lawsuit were Granite Rock and its employee, Christian Thomsen. The suit alleged that Granite Rock negligently and recklessly entrusted the company-owned vehicle to Thomsen, in light of Thomsen’s driving record, which made him unfit to drive a dangerous truck on the public roadways. The suit also alleged that Thomsen was most likely high on oxycodone at the time of the crash. The suit sought punitive damages from Granite Rock for knowingly allowing an employee with a history of driving under the influence of drugs to drive its company truck, and from Thomsen for knowingly driving while high on drugs.

During the discovery process in the case, our firm took the depositions of dozens of witnesses including employees of Granite Rock, the CHP officer that investigated the crash scene, and doctors and nurses that treated our clients after the crash. We also issued subpoenas to compel production of records to prove that Granite Rock knew about Thomsen’s history of driving under the influence of drugs and records to prove Thomsen’s alleged intoxication at the time.

The defendants, and their insurance companies, fought vigorously, and used one delaying tactic after another in the hopes of escaping financial responsibility of the harm caused to our clients. After years of litigation, just a few weeks before trial, the defendants finally relented and agreed to pay our clients a cumulative total of $9,850,000.00.

The Allen Law Firm has offices and meeting locations in Monterey, Santa Cruz and Salinas, and represents clients in cases of wrongful death and injury stemming from:

Contact our office today for a Free Consultation if you or a loved one have been injured or experienced the wrongful death of a family member.

By Allen Law Firm | Posted on July 7, 2022
« Settlement Spotlight
What Should I Do If I Am Injured Due to a Dangerous Roadway in California? »