According to statistics reported by USA Today, high speed police car chases injure over 7,400 people per year, about one person every hour. Every day, one person is killed as a result of a police car chase. Many of the people who are injured or killed are innocent bystanders or passengers who did not actively participate in fleeing from police.

Because of the dangers posed by high speed chases, an increasing number of police departments have adopted policies which prohibit officers from engaging in vehicle chases, except in cases where the person fleeing from authorities is suspected of committing violent crimes such as murder, attempted murder, kidnapping, or forceable rape. In such cases, the good to society of apprehending the fleeing criminal is thought to outweigh the risk of injury or death posed by the chase itself. 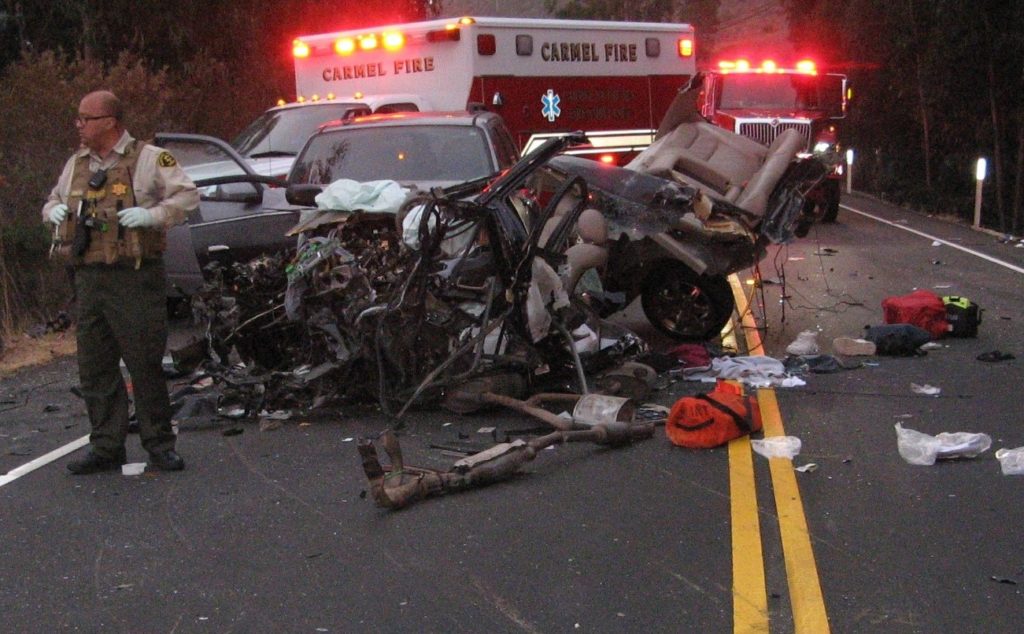 Highway 1 runs along the famous Big Sur coast. The road is world famous for scenic beauty. It is also a notoriously treacherous stretch of road, with many sharp turns. For long stretches, it is a narrow two-lane roadway with a drop off to the Pacific Ocean on one side, and steep mountains and dense chaparral on the other. The highway also has many blind curves and hills, where it is difficult to see on-coming traffic. In short, it is not a road that is generally safe to drive at a high rate of speed.

On a day in mid-October, a Monterey County Sheriff’s deputy received a report that suspects in a black Acura sedan were stealing items from unoccupied, parked cars along Highway 1 near Big Sur. The suspects had not used violence or threats of violence. In other words, they were committing the petty crimes of theft.

Later that afternoon, the Sheriff’s deputy spotted a black Acura. Believing it to be the car used by the suspected thieves, the deputy attempted to make a traffic stop. The Acura, however, sped away, headed north up Highway 1. The deputy decided to pursue, turned on his lights and sirens, and hit the gas on his patrol car.

A chase, sometimes at speeds well over 100 mph, ensued for the next 9 minutes along this dangerous roadway. Eventually, as the Acura attempted to pass two cars on a blind curve, the Acura slammed into an on-coming pickup truck. The driver of the truck, the Allen Law Firm’s client, was an employee of the California State Parks who was returning home after a day of work.

The force of the crash caused the Acura so much damage that it was barely recognizable. The Acura’s speedometer detached from the dashboard and was found in a field nearby, showing the last recorded speed of over 120 mph.

The pickup truck spun off of the highway into a ditch on the edge of a pasture. Our client, the pickup’s driver, suffered massive injuries as a result of the crash. Though he could smell gasoline leaking into the cab of the truck, our client had multiple broken bones, including badly shattered bones in both legs, so he was unable to free himself from the vehicle.

Thankfully, a passing motorist pulled our client to safety just seconds before the entire truck was engulfed in flames. Our client was airlifted to a trauma hospital, where the medical staff were able to save his life. The doctors and nurses also did their best to piece his shattered body back together. He would spend months in the hospital and later an acute rehabilitation facility. However, our client would never fully recover. Prior to the crash, our client was a healthy and active man looking forward to retirement after 20 years of service to the State Parks Department. After the crash, he can barely walk, and he suffers from constant pain.

Our car accident lawyer, Scott Allen, filed suit against the Monterey County Sheriff’s Office seeking to recover damages for the catastrophic personal injuries suffered by our client. The suit alleged that the Sheriff’s deputy acted negligently and recklessly by choosing to pursue a person suspected of committing only minor crimes along a dangerous stretch of highway; and, making the even worse decision to continue pursuing the suspect at speeds of over 100 mph along that dangerous road for over 9 minutes.

The Sheriff’s Office claimed to have immunity from this lawsuit. Our firm conducted extensive discovery, including demands for documents and depositions of Sheriff’s Office personnel to prove that there was no basis for immunity against our client’s claims. A judge of the Superior Court in Monterey held three pre-trial evidentiary hearing into the basis for immunity. At the end of one hearing, the judge announced that she was unlikely to grant the County’s motion for summary judgment. After that hearing, the culmination of more than a year of litigation, the parties held full day of mediation. At the end of the mediation session, the Sheriff’s Office agreed to pay our client a settlement of $2,000,000.00. The settlement also provides that, over and above the $2,000,000 settlement amount, our client’s future medical care will be paid.

The Allen Law Firm has offices and meeting locations in Monterey, Santa Cruz and Salinas, and represents clients in cases of wrongful death and injury stemming from:

Contact our office today for a Free Consultation if you or a loved one have been injured or experienced the wrongful death of a family member.