The Allen Law Firm’s personal injury attorneys recently represented two motorists who were injured by a drunk driver. The firm’s clients – a male driver and female passenger – were waiting at a traffic signal in Watsonville, California, when the rear of their car was slammed at a high rate of speed by another vehicle. The driver of the other vehicle, a Santa Cruz County resident, was arrested by police after breathalyzer tests showed his blood alcohol to be 0.25. The photos above show the damage to the front end of the drunk driver’s car as well as the empty beer cans and whiskey bottle littering the floor of the drunk driver’s vehicle. 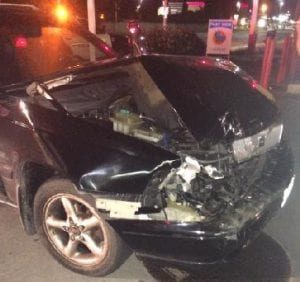 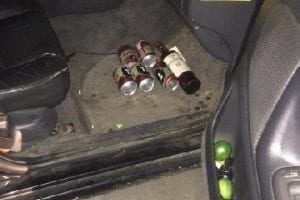 Our attorneys collected evidence regarding the client’s personal injuries, including hospital records, medical bills, documentation regarding the lost wages, and evidence of the clients’ pain and suffering. The firm submitted that evidence, along with a demand for compensation, to the drunk driver’s insurance company. After reviewing the demand, the insurer quickly paid the maximum amount of money available under its insurance policy to settle the case. The clients did not have to file a lawsuit. If the insurer refused to settle out of court, the drunk driver would most likely have faced personal liability for our clients’ injuries as well as potential punitive damages (punitive damages are sometimes awarded in drunk driving cases as a means of punishing the drunk driver for his or her behavior).

The Allen Law Firm is a personal injury law firm that represents clients who are injured by the wrongful acts of others, including cases involving car/auto accidents, slip and fall cases and claims against government entities. If you or someone you love have been injured in a car accident, truck accident, motor vehicle accident, or in any other kind of accident, call the Allen Law Firm’s injury lawyers today at (831) 901-3901