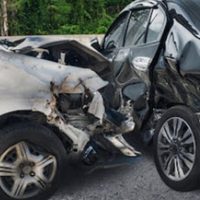 Head-on crashes are among the most common types of car accidents in Monterey County. Unfortunately, they are also among the most potentially deadly. They can happen on major highways or on rural roads and, unfortunately, reckless driving is often a factor. In light of the high number of recent fatal head-on collisions locally, our Monterey car accident lawyer wants you to be aware of the risks.

Multiple People Killed In Monterey County Due To Head-On Collisions

A rash of fatal head-on car accidents in Monterey County over the past few months has claimed the lives of at least three victims. Sadly, these crashes have become increasingly common, leaving friends and family devastated.

The recent incident involves a head-on collision between two drivers on Maher Road in Pruendale. An October 10, 2022 KION54 News report states that it happened when a 2012 Ford Explorer traveling westbound on the road crossed the median and struck a driver in a 2006 Nissan Pathfinder heading the opposite direction.

Officers with the Monterey division of the California Highway Patrol state that both motorists were pronounced dead at the scene. They are continuing to investigate the crash and have not indicated any underlying causes. Less than two weeks earlier, KSBW News 8 reported another fatal head-on collision, in which a driver traveling at a high rate of speed slammed directly into a tractor-tractor on Highway 101 in South Monterey, killing him instantly.

Going over posted speed limits and driving too fast for road, weather, or traffic conditions increases not only the risks of head-on collisions but also the likelihood of potentially fatal injuries. In addition to speeding, driving under the influence is another common contributing factor in these crashes which, according to the Insurance Information Institute (III), claim the lives of nearly 40,000 people each year.

When driving, it is important to be aware of the risks and situations that could increase the likelihood of a head-on car accident in Monterey. These include:

At The Allen Law Firm, we represent victims and their families when head-on collisions in Monterey happen. You can count on us to conduct a full investigation into your case and to hold at-fault drivers accountable. To get the professional legal representation you need in filing a claim, reach out to our Monterey car accident lawyer. Call or contact our office online to schedule an initial case consultation.

By Allen Law Firm | Posted on November 15, 2022
« Can I Sue A Property Owner If I’m Injured While Doing A Job for Them?
New Test Could Help Diagnosis Of Concussions In Monterey Car Accidents »